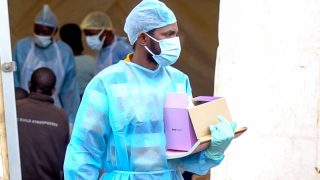 Johannesburg – Takatso – the SA government partner at SAA – says it “appreciates the resignation of Syranix’s nominated director, Mr. Gidon Novick from its Board”.

In a communique late Monday, the consortium said it deems Novick’s resignation as “appropriate in the circumstances given Novick and LIFT’s (Syranix and Global, who remain shareholders in Takatso) inherent conflicts of interest in relation to the SAA Transaction”.

Takatso said it was pursuing the SAA Transaction’s merger clearance by the competition authorities and seeks to comply with the relevant legislation at all times.

LIFT is a competitor to SAA and the Takatso Board identified potential conflicts of interest between the consortium and LIFT and has sought to manage these throughout the course of the transaction.

This includes the establishment of appropriate confidentiality and information management regimes in the spirit of maintaining fair competition in the South African airline market and in compliance with South Africa’s competition regulations.

“As stated by Mr. Novick, LIFT has (independent of Takatso) pursued business relationships with SAA outside of the Takatso-SAA Transaction and competition processes thereby heightening the requirement for Takatso to maintain internal confidentiality over information relating to SAA and the SAA Transaction,” said the communique.

“Mr. Novick’s resignation will therefore assist Takatso in managing these inherent conflicts of interest and maintaining confidentiality over sensitive information on a continuing basis.”

Takatso – funded and led by Harith General Partners Pty Ltd – said it continues to work closely with the team from the Department of Public Enterprises to conclude the acquisition of a controlling interest in SAA.

Additionally, Takatso said it has developed a business plan for a sustainable and competitive SAA endorsed by international aviation experts.

“Takatso has supplemented its technical expertise since identifying the above-mentioned conflicts of interest and is confident regarding its team’s capability to close the Transaction thereby paving the way for Takatso to operate a successful SAA once the proposed transaction has been implemented,” said the communique.

“Takatso is in advanced discussions to diversify SAA’s future industry partnerships, once clearance is granted by the competition authorities and the transaction is implemented, which will be key success factors in creating an agile Pan African airline.

“Takatso remains committed to contribute to the development of a sustainable and competitive airline and aviation sector in SA and increasing connectivity in Africa and the world.”