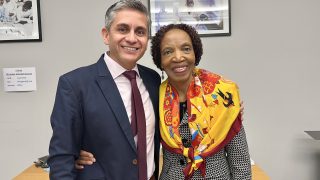 Johannesburg – The Department of Home Affairs has busted another local person allegedly involved in a syndicate that sells identities of South Africans to foreign nationals.

Ibrahim had been on the run since April this year following the arrest of the recruiter, Mohamed Ali, a corrupt former Home Affairs official Nhlanhla Mathebula, and four others.

All the accused were allegedly involved in a “photo swap” scam at the Home Affairs office in White River, Mpumalanga.

Ibrahim appeared at the Kliptown Magistrate Court on Monday and was remanded in custody.

The other suspects in the scam, Ali and Mathebula were denied bail and are on trial at the Mbombela Magistrate Court.

In a related matter, two Bangladeshi nationals were arrested at OR Tambo International Airport on Friday after they tried to use unlawfully acquired SA passports to leave the country.

One of the arrested Bangladeshis, Morshed Alam, arrived in South Africa in 2016.

Alam was already on the radar and was wanted for fraud in eThekwini after he unlawfully acquired an SA passport from the Home Affairs office in Commercial Road.

The official who issued this passport, Judy Zuma, was dismissed by the Department of Home Affairs in December 2021.

She is facing criminal charges that include corruption, fraud, and breaching the Immigration Act and the Identification Act.

The corruption charge stems from Zuma’s arrest in a sting operation after she tried to bribe a Counter Corruption officer with R10 000.

The fraudulent passport of the other arrested Bangladeshi, Fakrul Islam, was issued by Mathebula.

Islam arrived in South Africa in 2013 and is a holder of a Temporary Residence Visa, which is due to expire in 2024.

“Our persistent efforts are paying off. Since we arrested the Pakistani kingpin and 29 other people including Home Affairs officials in Krugersdorp on March 24, we have been unrelenting,” said Home Affairs Minister Dr. Aaron Motsoaledi.

“We have been on the trails of those who are participating in these schemes, and we are dealing harshly with our corrupt officials who facilitate these shameful acts.

“These arrests on Friday demonstrate that these criminals have nowhere to run. The police and our Counter Corruption unit are hot on their trail. We are expecting more arrests,”

All documents that are found to have been issued in fraudulent schemes are immediately cancelled by the Department.