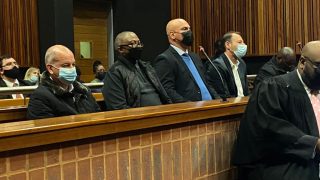 Arrested Advocate Malesela Teffo, who is representing four of the five men accused in the Senzo Meyiwa murder trial, was granted bail on R10 000 on Friday in the Hillbrow Magistrate’s Court.

In a dramatic turn of events on Thursday afternoon, Advocate Teffo was arrested inside the Pretoria High Court soon after the trial of the five men accused of Meyiwa’s murder was adjourned.

Advocate Teffo was handcuffed and led away. He spent the night in a cell in Hillbrow, Johannesburg.

On Friday, the court said it was the second time that Advocate Teffo had been arrested for the same offence – failing to appear as ordered.

The court, however, granted Advocate Teffo bail “in the interests of justice” and ordered that he appear on the initial offence next month, on 27 May.

It is thought that Advocate Teffo faces charges related to “trespassing” at a police station.

Advocate Teffo has previously claimed that his court and arrest woes were an “intimidation” tactic allegedly used by Police Minister Bheki Cele, the Hawks and the SA Police Service.

He previously said they want to scare him from representing the accused in the Meyiwa murder trial.(See video below)