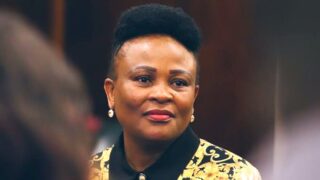 Mkhwebane Says Her Response To Ramaphosa Was Sent ‘Under Protest’

Thulamela Local Municipality former mayor Avhashoni Tshifhango, who allegedly accepted a Jeep Cherokee worth over R638 000 as a bribe in the Venda Mutual Bank (VBS) looting saga, have appeared in the Thohoyandou Magistrates’ Court, where he was granted R30 000 bail.

As part of their bail conditions, the accused are to surrender their passports to the investigating officer. They are not to make contact with witnesses directly or indirectly.

If the accused would like to leave the country for any reason, they must request permission to do so from the investigating officer.

The massive looting at VBS collapsed the mutual bank In 2018.

The mutual bank was declared insolvent and bankrupt and placed under curatorship, with South African citizens and taxpayers defrauded out of about R2 billion.

“The pair was arrested yesterday morning on allegations of corruption and maladministration,” said Colonel Katlego Mogale.

“This is following an intensive, prosecution aimed investigation by the Hawks’ Serious Corruption Investigation into the inappropriate administering of state funds into the Venda Mutual Bank by the Thulamela Local Municipality.”

Colonel Mogale said the investigation revealed that the municipality invested an amount of R30 million into VBS.

Colonel Mogale said 25 people have already been arrested in connection with the VBS looting. They face more than 100 charges.

More suspects are expected to be arrested during the course of the investigation as about 20 municipalities in Limpopo, North West and Gauteng lost nearly R1.6 billion after illegally investing with the bank.

The former mayor Tshifhango and municipal manager Maluleke will be back in the dock on 24 May 2022 – this time their matter will be heard in the Polokwane Specialised Commercial Crimes Court.