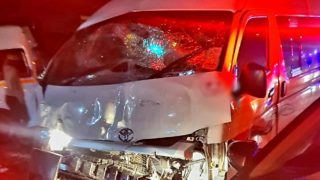 A woman in her forties died near the Mobeni Cemetery, Ethekwini, and 20 others were hurt when their minibus taxi was involved in a collision along Higginson Highway.

ALS Paramedics Medical Service said when paramedics arrived they found out that a fully laden taxi and a light motor vehicle had collided.

The taxi overturned and came to rest on its side.

“One person a female believed to be in her forties was found to have sustained fatal injuries and there was nothing more paramedics could do for her and she was declared deceased on the scene,” said ALS Paramedics Medical Service.

“Twenty other passengers sustained injuries ranging from minor to serious and were stabilised on the scene before being transported to various Durban hospitals.”

Police were investigating the collision that occurred just after 17h30 on Wednesday.

The name of the deceased was yet to be made public.