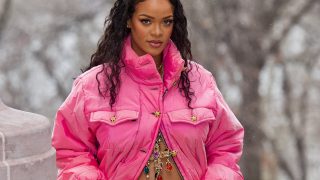 Rihanna And A$AP Rocky Have A Baby Boy, Name Yet to Be Made Public

Koffee Causes Rapture In The Harder They Fall

The much anticipated western action movie The Harder They Fall is now streaming on Netflix.

Gunning for revenge, outlaw Nat Love saddles up with his gang to take down enemy Rufus Buck, a ruthless crime boss who just got sprung from prison.

Jamaican Grammy award winner Mikayla Simpson, also known as Koffee is causing a “rapture” with her dancehall delivery on the movie’s soundtrack.

Other artists on the soundtrack of The Harder They Fall include JAY-Z, Kid Cudi, Fatoumata Diawara, Lauryn Hill, Barrington Levy, Alice Smith, CeeLo Green, Seal, Jadakiss, Conway The Machine, Backroad Gee, Laura Mvula, Mayra Andrade and Pretty Yende – the South African soprano who has risen to the top of the opera world with unparalleled speed.