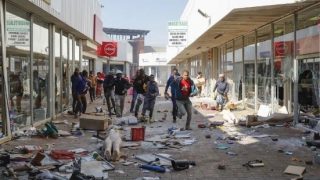 All Is Forgiven: Quinton Takes The Knee In Dubai

De Kock had opted out of South Africa’s previous match on Tuesday over his refusal to follow the anti-racism gesture, but later apologised and said he would be “happy” to do it.

Like he had promised, De Kock got down on one knee before the start of the Super 12 match in Sharjah.

While De Kock had hogged the pre-match headlines, it was David Miller who was the hero as South Africa beat Sri Lanka by four wickets with a ball to spare in the T20 World Cup on Saturday.

Miller hit two sixes in the last over as South Africa shrugged off a hat trick from Wanindu Hasaranga, which left it struggling on 112-6 in the 18th over, to clinch a second victory in the Super 12 stage.

The win keeps the Proteas in contention for a semifinal spot.

The 32-year-old Miller finished with 23 from 13 balls and was well supported by Kagiso Rabada to take his side beyond the target of 143.

Earlier Spinner Tabraiz Shamsi and seamer Dwaine Pretorius both took 3-17 as South Africa, who had won the toss and elected to field dismissed Sri Lanka for 142 in their allotted 20 overs.
Sri Lanka’s competitive total was anchored by opener Pathum Nissanka’s brilliant 72 from 58 balls.

The islanders appeared on course to successfully defend their score when leg spinner Hasaranga removed Bavuma (46) and Pretorius in consecutive balls in the 18th over, having removed Aiden Markram off the final ball of his previous spell.

South Africa, who needed 22 from nine balls, however, got over the line courtesy of some late power hitting by Rabada and Miller.