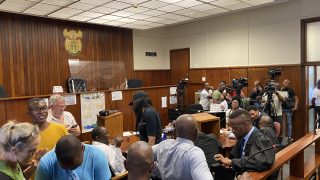 Businessman Kuben Moodley, who was arrested at OR Tambo International on Tuesday night before he could board his flight to Dubai, has been freed on R150 000 bail.

Moodley has been linked to the Transnet and Regiments Capital corruption saga involving more than R300 million.

Moodley stands accused in his personal capacity and as a representative of Albatime Pty Ltd for offences involving R307 million.

The offences were allegedly committed between June 2012 and 2017.

Moodley faces money laundering charges related to the proceeds received into two Albatime business bank accounts, one held at ABSA and the other at the Bank of Baroda.

The payments were allegedly from contracts improperly awarded by Transnet to Regiments Capital and Trillian Capital, as well as theft by Regiments Fund Managers from the Transnet Second Defined Benefit Fund.

The Investigating Directorate alleges that the payments relate to a criminal scheme in which Moodley would receive kickbacks of 3% on a R189 million payment that Transnet made to Regiments Capital.

Moodley also allegedly got a payment of R56 million, which Regiments Fund Managers are accused of stealing from the Transnet Second Defined Benefit Fund.

Moodley allegedly allowed Albatime accounts to be used to launder 75% of the R189 million and R56 million through entities controlled by the Gupta family.

This arrangement was then transferred to Trillian when the Regiments directors parted ways and Albatime allegedly laundered through to the Gupta Company, Tegeta, 80% of a Transnet payment of R93.4 million made to Trillian Asset Management.

Moodley is also accused of using these proceeds to assist members of the Gupta family to acquire Optimum Coal Mine for Tegeta.

Last year in June the Investigating Directorate obtained a restraint order over Moodley and Albatime’s assets to the value of R232 million.

A case of contempt of the restraint order remains pending against Moodley, who was freed on R150 000 bail after one night in the cells.

The court ruled that as part of his bail conditions Moodley should hand over his passport and report to the Sandton Police Station on Mondays and Fridays between 06 am – 6 pm.