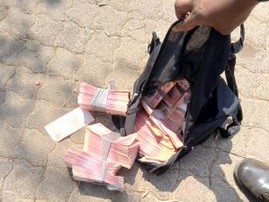 In these days of digital transactions is there anyone who still carries nearly a million rand in a backpack?

On Saturday, two men were flagged down by the police along Modderfontein Road, near Rabie Ridge.

The cops noticed the black backpack with the cash. On further inspection, the alert police officers discovered the money was fake.

It was not immediately clear what the arrested pair had intended to do with the fake money.

If any person was expecting a cash payment of nearly a million bucks they better thank their lucky stars the JMPD saved them from being conned.

The arrested pair will appear in court soon.