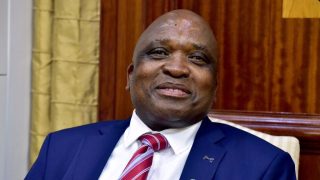 It has been eight years since Nelson Mandela passed on, but true to the saying “good deeds live forever” – the great statesman’s name pulled at the heartstrings of Qatar.

Earlier this week, the ambassador of Qatar to South Africa, Tariq Al Ansari, extended his country’s hand of friendship to the Thembekile Mandela Foundation.

The donation was made to the Qunu Clinic in the Eastern Cape.

The clinic serves an average of 70 people a day.

Speaking at the handover, Ndileka Mandela, the first grandchild of Nelson Mandela, welcomed the donation, saying it can not be left to the government to do everything.

She said it was important that the private sector, business, and civil society were able to also put their shoulder in the wheel.

“This I learned from my grandad,” said Ndileka Mandela.

Al Ansari said his country was considering doing more such as expanding the clinic buildings.

He said supporting the health sector was the policy of Qatar.

Candith Mashego-Dlamini, the deputy minister of International Relations and Cooperation, was also present at the handover.

Making reference to the Civid-19 pandemic, the deputy minister said all countries need to work together to overcome the health crisis.