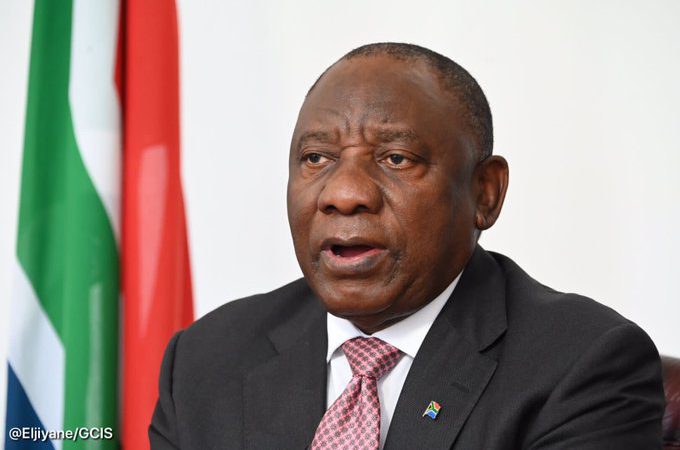 President Cyril Ramaphosa has kept a dignified silence on the unfolding events around his predecessor Jacob Zuma who has refused to go to jail as ordered by the Constitutional Court.

Even with broadcasts of Zuma’s supporters gathering at Nkandla in their hundreds in defiance of Covid-19 prevention regulations, Ramaphosa has opted not to interfere.

The massive crowds, some carrying spears and shields, made it clear they were at the former president’s homestead to prevent his arrest and imprisonment for contempt of court.

Many have tried to draw Ramaphosa into the vortex of court order defiance.

Instead on Monday morning, the president focussed his weekly letter on progress regarding tackling the Covid-19 pandemic ravaging South Africa driven by the more deadly Delta variant.

A further 175 Covid-19 related deaths have been reported, taking total fatalities to 61 507 to date.

“Since the onset of the coronavirus pandemic early last year, we have been waging a struggle on many fronts,” wrote Ramaphosa.

“We have been working to save lives, restore human health and protect livelihoods, and all the while revive an economy that was deeply damaged by the pandemic.

“As we intensify these efforts in the face of a third wave of infections, we are greatly encouraged by the latest evidence of economic recovery.”

He referred to the South African Revenue Service announced last week of another record trade surplus in May, to the value of R54.6 billion.

The surplus is due to a 1.5% increase in exports between April and May.

“Our trade balance surplus has been increasing year on year,” said the president.

The trade surplus is primarily driven by mineral and precious metal exports as well as exports of vehicle and transport equipment, chemical products and agricultural products.

“Rising global metals prices will play a significant role in accelerating our recovery from the pandemic downturn,” wrote the president.

“In addition, they open up a host of new opportunities in the mining value chain, boosting the fortunes of the mines themselves and with them the suppliers of capital goods and the options for beneficiation.”

Mining has always had a dual role in our economy and society.

On the one hand, mining contributes over half of our goods exports, around 10% of GDP and 5% of employment.

It is a pillar of the country’s capital goods industry. It is not a coincidence that when global metals prices peak, South Africa’s economy and job creation also surge.

On the other hand, mining has historically been central to South Africa’s deep inequalities.

Ownership is concentrated in a few huge companies, while workplaces, pay-scales and communities around the mines are still largely shaped by discriminatory relationships established under apartheid.

The challenge is to benefit from the mining boom while laying the groundwork for more diversified, inclusive and environmentally sustainable growth.

“We need to ensure that the returns from mining are used to promote more employment-friendly activities, and that they empower mineworkers and mining communities,” wrote Ramaphosa.

However, the president acknowledged that the government faces a host of other worthy demands for infrastructure support.

“They range from providing basic services for communities hit by the Covid-19 crisis, to upgrading industrial sites for manufacturing, to fixing the national electricity system,” said Ramaphosa.

He said the challenge was to use investment in infrastructure for the mining value chain to improve conditions for all of our producers and our communities.

“As South Africa, we too now face a challenge to our economic survival,” wrote Ramaphosa.

“Mining is vital to our economy and will continue to be for the foreseeable future.

“Let us grasp the opportunities that exist in this sector so that mining can help guide our path to a more inclusive and equitable economy.”