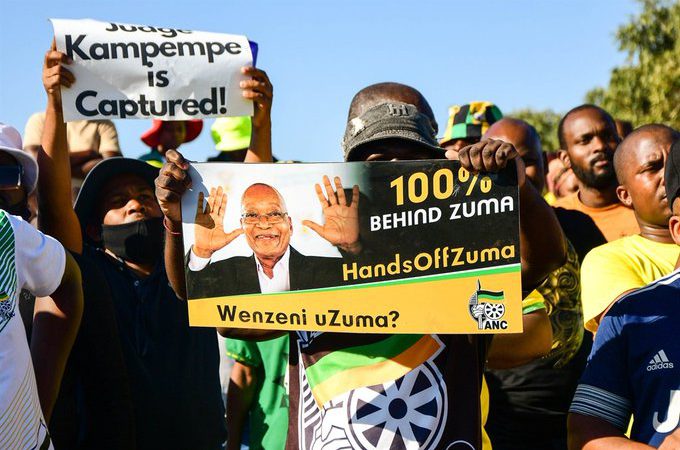 More people on Friday ignored Covid-19 prevention rules to gather near the homestead of former president, Jacob Zuma, to “prevent his arrest”.

The 79-year-old former president was on Tuesday found guilty of contempt of court in the Constitutional Court and sentenced to 15 months imprisonment.

Justice Sisi Virginia Khampepe, who delivered the majority judgment, ordered Zuma to hand himself over to the police within five days.

On Friday, she signed a prison committal warrant for the former president who has until Sunday to hand himself over to the police.

At the same time, Zuma’s lawyers were frantically trying to get a stay of execution of the warrant of arrest at the Pietermaritzburg High Court.

A day before many people – some armed with guns and spears – gathered outside Zuma’s homestead in direct defiance of Covid-19 prevention regulations.

South Africa is in the throes of the third wave, driven by the more deadly Delta variant. The latest daily figures recorded were 21 584 new Covid-19 cases and 382 deaths.

Ignoring the Covid-19 crisis, MKVA members in military fatigues along with huge numbers of supporters are gathered at Nkandla. They are declaring their loyalty to Zuma to anyone who cares to listen.

The obvious intention is to form a human shield around the former president’s homestead and prevent his arrest.

Others have taken to Twitter to warn of “civil war” if Zuma is arrested.

They point to the case of the apartheid-era president, Pieter Willem Botha, who refused to testify at the TRC, and labeled the commission “a witch hunt”.

PW Botha was found guilty of contempt of court, fined R10 000 and given a suspended 12-months prison sentence.

On Tuesday Justice Khampepe said owing to Zuma’s attacks on the judiciary, the Concourt had no choice but to jail him.

“The longer that Mr. Zuma’s recalcitrance is allowed to sit in the light, and heat, of day, so the threat faced by the rule of law and the administration of justice curdles,” said Khampepe.