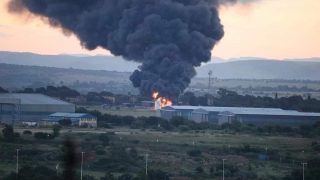 Out Of Pocket Zizi Bought A Jeep Worth R800k

Times were hard and he needed money so a rich friend gave him a loan of a million rand – that is what State Security Deputy Minister Zizi Kodwa told the Zondo Commission on Monday.

Explaining why he turned to his wealthy friend Jehad Mackay, who at the time was chief executive of EOH, Kodwa said he was so broke the banks wouldn’t lend him any money,

Kodwa says the million rand his property tycoon buddy gave him “had no strings attached”. The deputy minister said he used the bulk of the loan to buy a Jeep.

Evidence leader advocate Matthew Chaskalson asked: “If you were in financial difficulties, why did you buy a R800 000 car?”

Kodwa responded: “That is wisdom we can debate”.

Referring to emails from Mackay to Kodwa inquiring about how to donate to the ANC, Chaskalson asked the deputy minister if he had not taken money meant for the party.

Kodwa, a former ANC spokesperson, rejected the assertion and complained about a section of the country that he said unfairly assumed politicians were corrupt rather than prone to mistakes.

Justice Zondo interjected and instead asked what is it that politicians in ANC are doing that causes people to have that negative perception of them.

Although Kodwa admitted receiving deposits involving “figures that seem high”, he denied any wrongdoing related to the monies he got from former EOH CEO Mackay.

Last year an ENSafrica investigation found evidence of a number of governance failings and wrongdoing at EOH, including unsubstantiated payments, and tender irregularities.

“I never dealt with EOH, I only dealt with Mr McKay, the claim by him that the R1 million was a donation to the ANC is not true, it was a loan to myself which I haven’t paid,” Kodwa told Justice Zondo, the chair of the commission.

Meanwhile, the North Gauteng High Court in Pretoria on Monday granted the Zondo commission a three-month extension to complete its work.

The Zondo Commission is investigating allegations of state capture, corruption, fraud, and other allegations in the public sector including organs of state.

The commission has already revealed how billions of rand were siphoned from the economy through state capture and corruption.