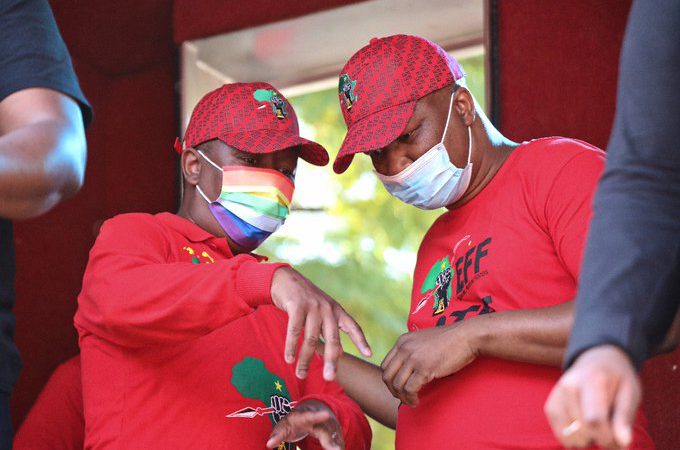 Thousands of people on Friday ignored gathering limits imposed by the government to curb the spread of Covid-19 when they joined the Economic Freedom Fighters (EFF) on a vaccine protest march.

EFF leader Julius Malema led thousands of members on a march from Pretoria CBD to the South African Health Products Regulatory Authority (SAHPRA) offices in Arcadia, where they demanded the immediate licensing of China’s Sinovac and Russia’s Sputnik vaccines.

Commenting on fears that his “march to save lives” could turn out to be a superspreader, Malema rejected the notion and retorted: “A superspreader is Shoprite”.

He said if it was white people taking part in protest march no one would say it was a superspreader.

Addressing the massive crowd at the SAHPRA offices Malema said the EFF was the only party that donated R15 million towards the fight against the pandemic.

He said the EFF was pressing for the licensing of Covid-19 vaccines from Russia, China, and Cuba.

South Africa has licensed the use of Johnson and Johnson and Pfizer, but the EFF wants Russia’s Sputnik and China’s Sinovac to be made available.

The EFF handed over a memorandum of demand with a seven-day ultimatum.

The EFF is demanding that Sahpra immediately approve vaccines from China and Russia. Malema also demanded that board chair, Helen Rees, resign.

Malema said if Rees does not resign within seven days the EFF will go to her house. He accused Rees’ husband of having shares in a company that is supplying vaccines.

Commenting on the EFF protest march, the Democratic Party said: “Ramaphosa has dropped the ball on vaccines, but we don’t need (CIC) Covid Spreader In Chief, Julius Malema, to make things worse.

“Stop super-spreader events! Gauteng has over 70 000 active cases, the EFF’s march today is irresponsible and places lives in danger.”