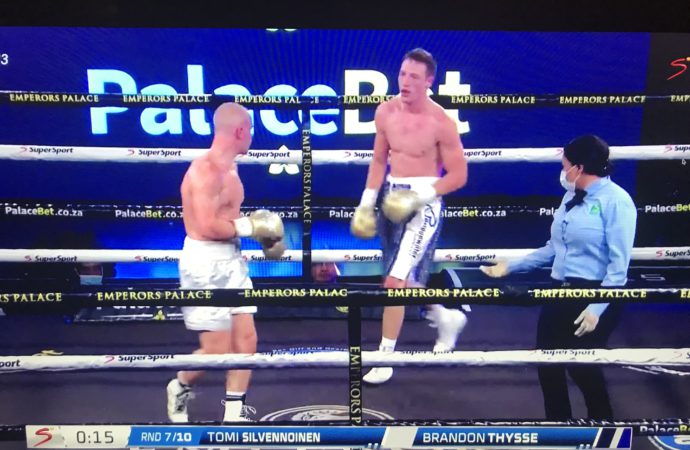 South Africa’s Brendon Thysse toyed with Tomi Silvennoinen from Finland punching him at will until the Finn gave up in round 10 of their international non-title fight on Saturday.

Thysse, whose camp is considering moving him overseas to get better opponents, easily won the one-sided affair.

The 26-year-old has never been stopped. Before he KO’d Silvennoinen, Thysse had knocked out 11 opponents in 13 wins.

The few times the Finn put together a few punches the taller Thysee easily fended him off. Silvennoinen resorted to holding until he was docked a point.

There were no fans at the Emperors Palace, Kempton Park in Johannesburg, owing to the Covid-19 pandemic.

In the 10th and final round of the Generation NeXt fight, Thysee dropped Silvennoinen twice with vicious body punches.

The second knockdown from a right punch to the short rib was too much for Silvennoinen, who sunk to his knees until it was over.

The referee counted the Finn out.