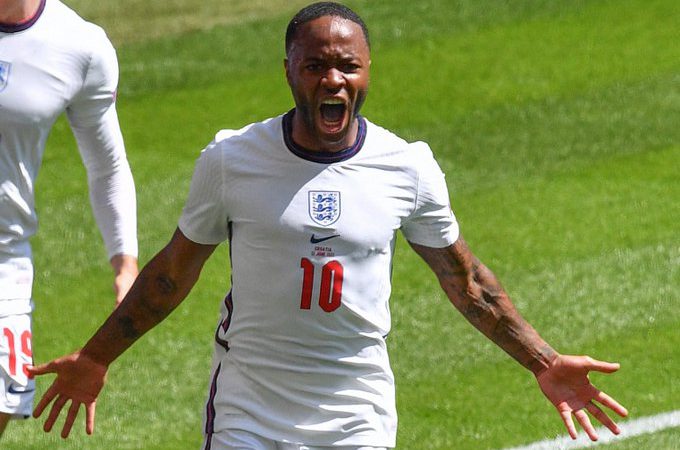 Raheem Sterling scored the only goal on Sunday afternoon when England beat Croatia 1-0 at Wembley in the EURO2020 Group D contest.

The diminutive Manchester City forward ran onto a through ball from Leeds midfielder Kalvin Phillips and beat the Croatia keeper with a powerful shot.

Sterling’s 56th-minute goal took the wind out of Croatia. Captain Luka Modric tried to get his team back in the game, but they seemed leggy.

England players were first to the loose ball and quick to the tackle.

Harry Kane, the England skipper, gave supporters a scare when he collided with the goalpost while trying to reach the ball.

The Tottenham player lay on the ground while medics checked on him.

Fans were understandably concerned after Saturday’s frightening episode in the Denmark vs Finland game in Copenhagen on Saturday evening,. Denmark’s Christian Eriksen collapsed and had to be hospitalised.

His condition has been described as stable. Doctors said Eriksen suffered cardiac arrest and was “gone” before he was revived.

Fortunately, Kane seemed fine, but he was substituted near the end.

About 23 000 fans that met Covid-19 prevention requirements were allowed into the stadium to watch the game.

In the other match on Sunday the Netherlands overcame a resurgent Ukraine 3-2 with a late goal in the 85th minute scored by Denzil Dumfries.

After a goalless first half, the Netherlands went ahead with goals from Georginio Wijnaldum in the 52nd minute and Wout Weghorst six minutes later.

But Ukraine dug deep and put up a spirited fightback to equalise with two quick goals from Andriy Yarmolenko (75′) and Roman Yasemchuk (79′).

Just when it looked like the Netherlands had thrown away a two-goal lead they managed to score a third goal to win the EURO2020 Group C contest.