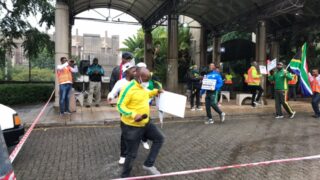 Football fans watched in shock horror as Denmark’s Christian Eriksen was stretchered off the pitch after collapsing during the Euro 2020 soccer match between Denmark and Finland.

The championship Group B match at Parken Stadium in Copenhagen on Saturday was stopped just before halftime when Eriksen fell to the ground.

Concerned for their star player who fell near the touchline, teammates signaled the medics to come to his aid.

Medical staff ran onto the field and tried to revive the 29-year-old Inter Milan player for about a quarter of an hour before they carried him away to a waiting ambulance.

Reports from the hospital said Eriksen had been stabilised.

“The UEFA EURO 2020 match in Copenhagen has been suspended due to a medical emergency,” UEFA said in a short statement.

The game eventually restarted after a delay of more than 90 minutes. Finland won 1-0 from a Joel Pohjanpalo goal.

UEFA president, Aleksander Ceferin, later added: “Moments like this put everything in life into perspective.

“I wish Christian a full and speedy recovery and pray his family has strength and faith”.

In the other Group B match Belgium, without recovering star player Kevin Du Bruyne, beat Russia 3-0 courtesy of a brace from Romelu Lukaku and a 34th minute goal scored by Thomas Meunier.

Wales and Switzerland drew 1 all in their Group A match. Welshman Kieffer Moore scored in the 74th minute to cancel Breel Embolo’s earlier goal for Switzerland.

On Friday night Italy kicked off the European Championship with a convincing 3-0 victory over Turkey in Group A at Rome’s Stadio Olimpico with goals scored by Ciro Immobile and Lorenzo Insigne.